Firefighters in the Field: Exports to British Columbia

Posted by albertawildfire on November 2, 2017 in 2017 Wildfire Season |No Comments

Hearing that BC was in a state of emergency from the amount of active fires was hard to swallow. The forest fires were getting worse and people were losing their homes. While Victoria (my current home for university) wasn’t in any danger, my friends and their families in surrounding cities were. Knowing that people were being evacuated from their homes, forced to leave all their personal belongings behind, was disheartening. All my crew and I wanted was an opportunity to help B.C. out. 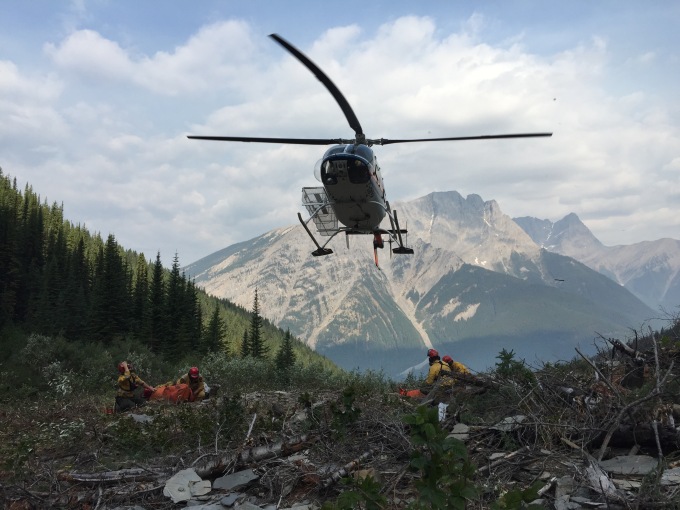 We got the call during our days off. We were being called back for an export to BC. The first few days on shift were spent driving. We stopped off in Hinton to be briefed about our export, and then drove to Kamloops for our marching orders. Initially my crew was sent to Clearwater to work a large fire nearby. However, after a single day being there, a different fire jumped up in priority as it took a run, growing substantially. We were quickly moved to the Clinton fire base which was located in the yard of a local elementary school. It had dining facilities, portable washroom facilities, and hundreds of tents set up by all the firefighters from across the country working the Elephant Hill Fire.

Elephant Hill Fire, also known as Cash Creek Fire, extended over 80,000 hectares in the hilly terrain of BC. Threatening local communities like Loon Lake and its residents, the fire was high on the fire priority list in the province.

Our orders for the first few days on the Elephant Hill Fire were to work a 5 hectare spot fire which was particularly active and hot. We set up two different pumps; one pumping out of Loon Lake and the second in a bladder a few hundred meters up the side of the small mountain we were working to counter back pressure. We laid enough hose (roughly 1.2km) to reach the spot fire and started putting out the perimeter. Two days in, on what seemed to be an average day (aside from wind conditions), the fire jumped the guard (a fuel break created by dozers) around 5 pm. This is a process we’ve been trained and briefed on; following the LACES Survival System (Lookouts, Awareness, Communication, Escape Routes, Safety Zones) to ensure everyone leaves the area in the most efficient manner possible. We were immediately evacuated, long before that area burned over. 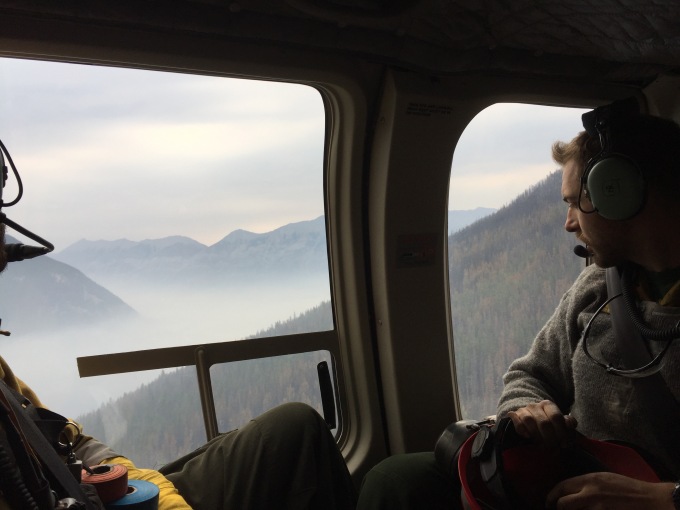 We staged on a road down the hill from the fire where we watched as the smoke billowed white and black above the trees. We quickly noticed below the road, a large grass fire had started creeping down the hill. We immediately jumped into action with Wajax bags and hand tools to put it out.

Once the grass fires were contained to the best of our ability, we drove into the local town of Clinton to meet up with structural firefighters. The orders were to help them with structural protection by putting up sprinklers around local homes at risk. The sprinklers would give a consistent supply of moisture to the homes to help prevent them from catching fire. By the time we got home that night, it was 2am and we had worked a 19 hour day.

The following day, we were evacuated from the fire base and switched over to night shifts going from 7pm to 8:15am. The adjustment period was difficult. You can only imagine trying to sleep in a tent during the day while it’s 30+ degrees out. Luckily when we moved fire bases due to the evacuation orders, we were put up in a local motel with black out curtains. Night ops was one of the most memorable experiences I’ve ever had. We worked with a local BC crew from Vernon (The Stalkers) as they back burned sections of a forest so that it would burn (in a controlled manner) into the large fire, leaving no fuel for it to take off.

The rest of the experience consisted of night patrols, back burning, demobilizing the day crews hose lays, and laying new ones along sections of guards that were built. The hardest part was trying to get accustomed to working night shifts, trying to stay awake while it was dark out and sleeping while it was light out. The weirdest part was eating dinner for breakfast and breakfast for dinner!

All in all, it was an incredble experience. I’m so happy we were given the chance to help BC and thank them for all the help they gave us last year during the Fort McMurray fire.

My 4th and final export for the season was to Kootenay National Park, BC. Verdant Creek Fire was an 11,000 hectare fire which started a month prior in the mountains of Kootenay. It had grown and was threatening the main highway as it slowly crept towards Banff National Park. Our mission, along with a few other crews who had been called in from across the country, was to help hold the fireline while further preventing its advancement.

During the fire, my crew was given specific orders to hold Miracle Creek, a section of the fire which was given its name because against all odds, this little creek somehow managed to hold the fire. Our objective was to search for hot spots 100 feet in from the perimeter line and put them out. Easy enough, however the terrain was completely different from what we were used to back in Alberta. Northern Alberta is covered in muskeg (mossy terrain) which keeps you wet on a consistent basis, but Kootenay was a mountainous terrain, with steep slopes. Trekking this terrain was hard and took some getting used to.

Our second task was to work Shanks Flank, to prevent the fire from advancing any further. In order to do this, we were flown onto a riverside helipad. We began cutting a perimeter line to push hose 2.2km up to a location where we cut a second helipad. From there, we held the perimeter while hot spotting the fire 100 feet in. Using a mix of econo hose and inch and a half hose, we managed to cool down the fire activity drastically. Unfortunately, as we were headed to the lower helipad to be picked up by the helicopter, I sprained my ankle on a charged hose. Ending my summer with an injury was not how I had hoped to finish but I was lucky enough to assist in the warehouse until our shift was done.