Firefighter in the Field

Posted by albertawildfire on August 18, 2017 in Uncategorized |No Comments

Eagle’s Nest is an old forestry base situated about 150 kilometres northwest of Fort McMurray. Though the cabins are well-weathered and the camp has been abandoned for quite some time, we occasionally stop for the day at this magnificent spot.  Not only is it a good strategic location to respond to wildfires that pop up between towers in this area of the district, but it is on a lake that many outdoor enthusiasts would save a lifetime to build a cabin on.  The small peninsula stretches into the magnificent lake and almost points to the small island a few hundred meters away, which is home to the most amazing eagle’s nest I have ever seen.  The two habitants of the nest currently have babies and one of them was out in flight as we came into land. 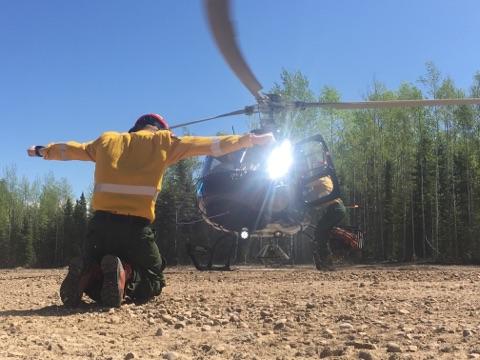 Today the temperature is in the mid-twenties and the relative humidity is around the same.  This can result in ‘crossover’ conditions, the infamous conditions that can cause extreme wildfire behaviour. With lightning two days ago, we are expecting a wildfire to pop up, which we will be responding to within five minutes of its detection. We exist in an interesting state of being these days; enjoying the calm serenity of nature whilst being on-edge in a constant state of readiness.

Every morning we go through a briefing on the state of the forest and educate ourselves on the expected wildfire conditions for that day.  As we prepare our gear for the helicopter, weight is a critical consideration – every pound plays a factor in our calculations for allowable weights in the helicopter.  This not only applies to our gear, but to our personal weight as well.  Our crew is very physical and dedicates a good portion of the week to physical fitness.  The members on my crew are extremely fit. Nat is training for a marathon and is running more than I can fathom.  Steph’s hitting the gym daily and is more dedicated than I have ever seen her, and our crew leader Latham lives up to his reputation as being the beast of our district with his Arnold-esque physique. 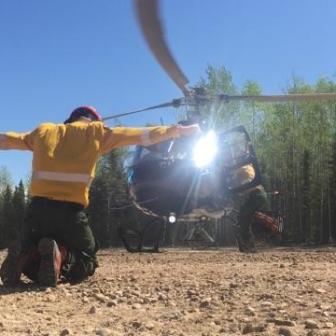 With our gear and personal weights in check, we load into the helicopter for our daily commute into the adventurous north.  There is always a deadpan silence in the backseat as we listen to the machine spool-up; the satisfying purr of the helicopter ready to break ground-effect and soar off over the northern boreal forest of the Fort McMurray Forest Area.

Quite often in the Fort McMurray Forest Area we have limited options on how to approach a wildfire.  In these cases, the helicopter must hold a hover and we have to exit the helicopter while it is still in flight. This is known as a hover exit and requires annual certification which must be obtained from an instructor and kept up to date.  The crews at Martin Base took half a day at the beginning of this shift and under the watchful tutelage of Latham and Cody to earn the certifications necessary to hover-exit onto wildfires.  I have performed multiple hover exits in live-fire scenarios and can attest to the fact that it is one of the best parts of the job.  To exit the helicopter in flight and be left with a Pulaski to clear some trees in a wildfire situation is truly one of the finer things in life I have experienced. 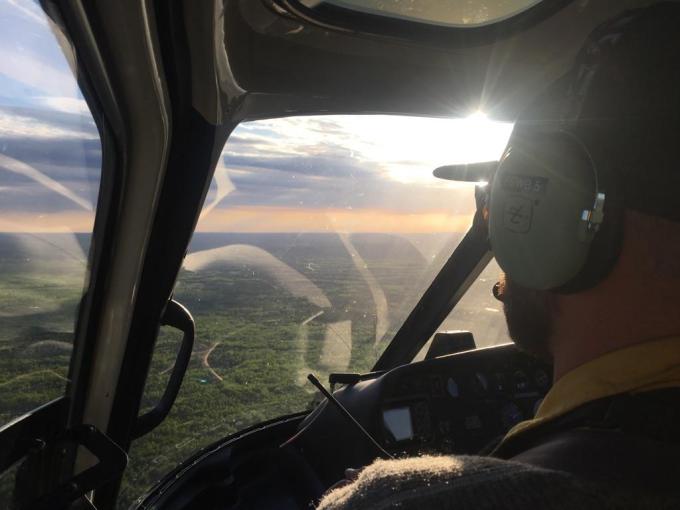 It does feel strange to have had so few wildfires at this stage of the year.  By this time in previous years we would have already been in double digits for our fire numbers. And it is a striking opposite to our situation last year when the costliest natural disaster in Canada’s history in terms of insurable losses was happening at our doorstep – the Horse River wildfire.

So for now, we stay focused, ready, and rested.  Some areas of the district are a tinder box right now, and with the coming forecast this week we all think there is a fight right around the corner.